​The OPRC-HNS Protocol 2000 requires governments to establish the training of relevant personnel and a programme of exercises for the response to pollution from hazardous and noxious substances (HNS). The protocol also called for IMO to develop a comprehensive training programme in cooperation with interested governments and industry. 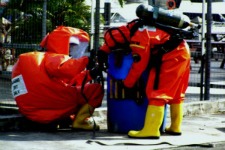 At the 53rd session of IMO’s Marine Environment Protection Committee (MEPC) and on the recommendation of the OPRC-HNS Technical Group approval was given for a project to develop two model training courses for preparedness and response to marine incidents involving hazardous and noxious substances.

The objective of these model courses was to provide practical training and guidance in preparing for and responding to HNS incidents. The courses were not designed to train response personnel. This is a separate and very specific subject.

The new courses were designed to complement the suite of existing IMO OPRC model courses for preparedness and response to marine oil spills and aimed to support the efforts of countries in acceding to and implementing the OPRC Convention 1990 and its HNS Protocol 2000.

What Participants Say About Our Courses

This course is insightful to me and the foundation training is definitely useful for participants with minimal or no direct experience on oil spill response – Mr Kelvin Ching, Maritime and Port Authority of Singapore (OPRC Model Training Course Introductory Level – 15 Feb 2017)

Founded in 2016 to provide a better model for emergency preparedness and crisis management in organisations.